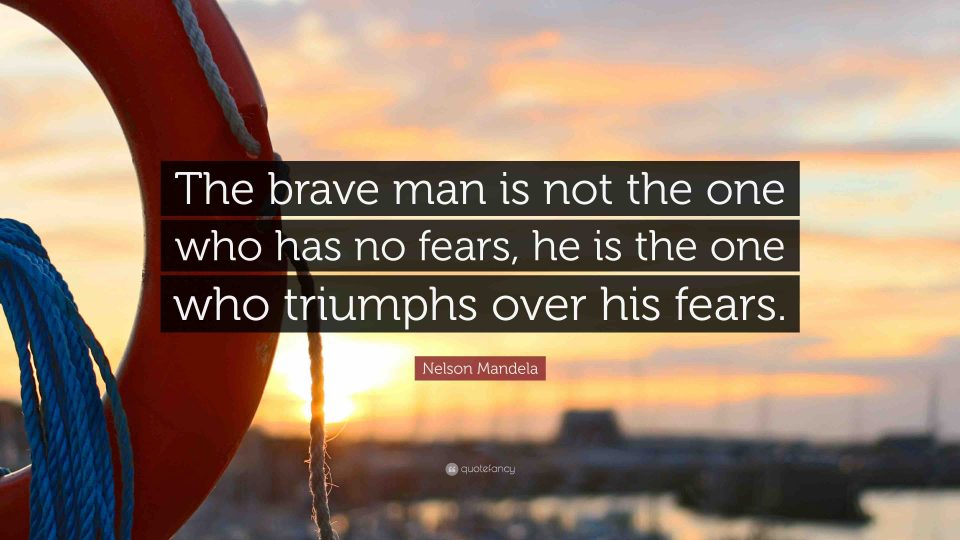 I was about about two-thirds of the way to the top of a rock climbing wall when I realized I was too tired to keep going, and too tired to climb down. A slack rope snaked up the wall beneath me and hooked into several anchor points before finishing in a knot at my waist. Looking down the 30 or so feet to the ground, I felt myself break into a cool sweat. I had two options at this point: intentionally fall anywhere between 10 and 15 feet before my partner below trapped the rope and arrested my fall–perfectly safe, in theory, in the controlled environment of an indoor climbing gym–or live the rest of my days on this wall.

As stupid and melodramatic as it sounds, I seriously considered what it would be like to spend the rest of my life right where I was. The idea wasn’t pretty–how would I get meals? how would going to the bathroom work? would I ever find true love up here?–but in that moment I wanted nothing more than to not have to take that fall. That singular fear overrode all else, leaving me completely paralyzed.

In fact, I’m writing this from that same climbing wall–no, of course not. Obviously I eventually made it down the wall. I wish I could say that in my moment of panic, I gave myself a rallying pep talk and confidently leapt off the wall. Unfortunately, instead, I spent another 5-10 minutes up there wondering why I had ever been born and why on earth I had decided that coming up this wall was a good idea in the first place. Then, with a bit of a whimper, I individually unwrapped each of my fingers until I was no longer holding on to the wall and I fell.

Fear is one of our oldest and most primitive emotions. Once upon a time, fear kept us alert, and kept us alive; it was our sixth sense, the superpower that prevented us from becoming food for sabre-toothed tigers, giant flesh-eating kangaroos, or demon ducks of doom. Over time humans evolved and moved up the food chain, and all of these predators went extinct. Our fears, however, did not.

Everyone is afraid of something. Personally, I’m afraid of a lot of things. There are physical fears–spiders and heights–and there are psychological fears–failure and rejection. While there are certainly many things to legitimately fear in the modern world, just as many of the things we commonly fear are not life-threatening. These fears are vestigial, but they are often nevertheless pervasive and pernicious. Sometimes they affect our lives in conscious and obvious ways: the fear of physical things like spiders and heights may lead us to go out of our way to avoid these things, even when our rational mind knows there’s no actual danger; the fear of failure might make you afraid to quit your job and follow a dream, or even just to take risks at work; and the fear of rejection might make you afraid to talk to someone attractive, or even just to be authentic with yourself.

Psychological fears can also control us in more subtle but no less nefarious ways. The greatest deceptions are the lies we tell ourselves to justify avoiding the things we fear the most: you might convince yourself that what you dream of doing instead of holding a stable, traditional job, is whimsical, irresponsible, or impractical, when really you’re just afraid that if you tried you might fail; or you might convince yourself that someone you find attractive is “out of your league,” when really you’re just afraid that if you made your interest known they might reject you. Because we are afraid, we let these things stop us from being authentic, from living with integrity, and doing what we really want to do–perhaps, even, doing what we were really meant to do.

Ironically, despite the Western Democratic ideals of Liberty and Freedom, many of us unwittingly live in the invisible prison of the mind constructed by our fears and insecurities. Whether we are aware of them or not, our fears define the limits of our realities, and in order to become all that we can be we must learn to see them, to challenge them, and ultimately to overcome them.

The mission to escape the confines of this mental cage and other forms of emotional inertia is what led to my being on that climbing wall despite a lifelong fear of heights and of falling. I eventually did get to the point where I could confidently leap from the wall, and not let fear stop me from getting to the top. In facing that fear, and a few others, I’ve cultivated the courage to face larger and more life-altering fears like the fear of failure.

In the process, I’ve learned that courage cannot exist without fear anymore than light without darkness. I’ve learned that courage isn’t so much about banishing fear, as it is about accepting it so completely and so thoroughly that it loses its hold on us. I’ve learned that mastering courage means learning to re-frame fear in real time so that we can act with clarity, confidence, and integrity in defiance of its influence. As I continue to push the bounds of my comfort zone, I’ve found that my perspective of what’s possible has naturally shifted, leading to a sense of greater fulfillment, a more authentic life and disposition, and a more consistent belief in hope rather than fear. Now I want to share with you how you can have that, too.

What are you afraid of? What are the lies you tell yourself to avoid those fears? What would you do and who would you be if you weren’t afraid? Tell me about it in the comments below, and stay tuned in the following weeks to learn how to recognize fear, cultivate the courage to conquer it, and live the life you’re meant to. Until then, in the words of Nelson Mandela, “May your choices reflect your hopes, not your fears.”