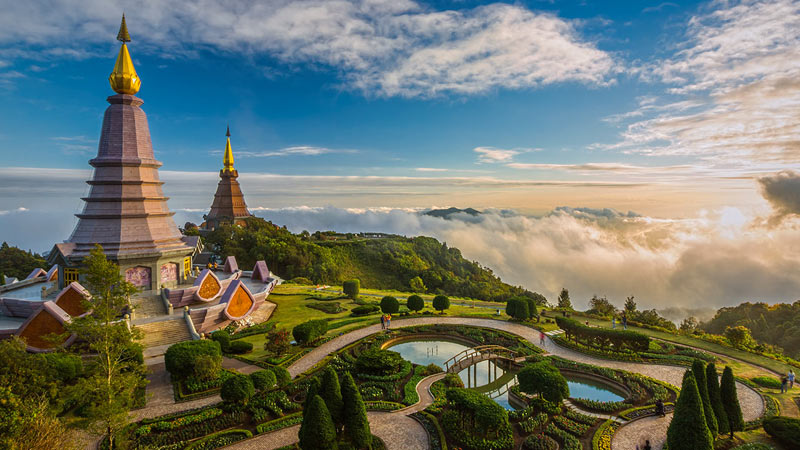 It’s been about a month since I left the States, and, though I expect there will be many more twists and turns on my journey, I think I can already confidently say that leaving to travel was one of the best decisions I’ve ever made. Learning to balance work, tourism, and new friends has, indeed, been challenging. While overall productivity has slowed a bit, I can’t help but feel that my sense of growth and fulfillment have both accelerated.

Despite being on the learning curve, I think I did decently on my goals for the month. My consulting engagement has, unfortunately, stretched on a little bit, and I’ve only just recently reached a point where it no longer needs my focus full-time. I had hoped that I’d get back to my own projects and start making some non-consulting income in February, but alas that hasn’t been the way of things. I did, however, make a lot of great friends and a lot of great memories in Chiang Mai. Here are some of my favorites, pulled from my vlog: Meet Squeaky, my trusty pink steed. See us in your rear view mirror and be afraid.

I’m in Ho Chi Minh City–aka Saigon–now (though I’ll wait until next month to write in-depth about this wonderful new city), and my plan for March is to buckle down and finish releasing my first product into the world. I’d ideally like to have my first paid customer before I leave Southeast Asia at the end of April, and more ideally would love to have my first paid customer before the end of this month. As was the case in Chiang Mai, however, while work is a high priority, I’m also hoping to find time to really experience Vietnam, and discover new ways to push my comfort zone. In particular, dating, which didn’t end up being a huge emphasis in February despite some of my efforts, seems likely to be a focus area for me in March.

Moving abroad has done wonders for my morale. Before I left, I had a lot of fears about traveling, especially while still trying to get my business ideas off the ground. I worried that I’d be isolated without friends out here, that it would be impossible to form meaningful relationships with people on such small timescales, or that living abroad would be devastatingly unproductive. The reality has been almost completely the opposite of my fears. Though I was nervous about meeting new people abroad at first, I found that my fear of isolation really motivated me to push my social comfort zone. I’ve never been the social traveler hanging out with strangers in hostel lounges, so I arrived in Chiang Mai with the self-perception that I’m not the kind of person who usually meets other travelers. When I left Chiang Mai, however, I did so feeling confident in my ability to start new conversations, and connect with new people everywhere I went. It’s become something of a habit to make eye contact with people when I walk into a room, to smile, and even to ask them where they’re from.

Despite my short length of stay in Chiang Mai, I got to know some people very well. I’ve left feeling like I now have friends all over the world, who I hope to meet-up with as I make my way through and around the world. My roommates, Richard and Kat, in particular, have become close friends whose company and counsel I value very highly. I’ve also met, and gotten to know, other nomads from all over the world, working on various interesting things. I’m beginning to open myself up to the idea that, even in a short length of time, it is possible to create a meaningful and valuable connection with someone, and that it is worth my time to invest in these relationships despite their semi-transient nature.

Productivity has been up and down while traveling. Since I’ve been consulting an hourly rate, I’ve been tracking my time very carefully, and have found that I usually work about 6 hours on an average day. At first, I found this number disconcerting: I normally expect that I’m getting at least 8 hours of work done each day. In reality, however, with all of the breaks modern knowledge workers take for lunch and other things, 6-7 hours is probably closer to right for a business day. For me personally, being abroad has definitely meant more time spent out at lunch, especially when meeting new and getting to know new people. It’s also meant less time spent working after dinner, which is also prime time to be spending with new friends. For the most part, I’ve been able to find enough of a routine to stay on task–usually I’d work out of a coworking space for the entire day, or out of a coffee shop for the afternoon.

I have, however, taken a good amount of advantage of the flexibility that being self-employed provides: where necessary to accommodate travel activities, I’ve taken impromptu 3-day weekends or half days off. Calibrating my balance of all of this is something I certainly want to continue working on going forward. I think that as an explorer, the first time I visit a new place, there’s likely to be some overhead in my wanting to really experience and get to know the place. At this point, though, I feel that if I ever return to Chiang Mai (and I really hope to), it will be easier for me to focus on work.

Through traveling, though, I’ve also been exposed to a wealth of new people and perspectives. Chiang Mai is, itself, a very laid back place–the locals tend to live simple lives and prefer it that way, and the nomads are often also a little more chill in their working mindsets than I’m used to coming from Silicon Valley. Many of the Europeans I’ve met have helped me to understand how the American work ethic is often perceived by the rest of the world: there’s a subtle belief that Americans are willing to commit kind of a frenetic and, potentially, ill-conceived trade-off in quality of life against the desire to be productive and accumulate wealth. Some have even considered moving to the States for work, but thought better of it after learning of the insane hours and work expectations often implicitly upheld by employers in places like Silicon Valley and New York City. To be fair, I’m learning as well that American salaries are also often much higher than their global counterparts, but I’ve also heard enough to begin to question whether or not our quality of life improves proportionally. In fact, I’d say that my early conclusions are so far that we Americans may actually have disproportionately low quality of life when plotted against our wages–an average worker making minimum wage in America is actually making more than some of the highest paying jobs in some places, but isn’t able to afford many of the basic amenities that some people value. This, among other things, has deeply challenged my perspective, my worldview, and my workview.

Of course, it hasn’t been all sunshine and roses abroad. On my third or fourth day in Chiang Mai, I experienced an extreme amount of anxiety around my situation and my decisions–so bad, in fact, that I felt it necessary to do some research on remote therapy solutions, so I might be able to unpack my experience with an expert. I couldn’t believe that I’d left the States. I couldn’t believe that I was in a new country. I was scared that I couldn’t or wouldn’t adapt, that I’d find myself alone in a strange place. I was afraid that I’d just bet my career against the house, and that I’d never recover.

By the end of my first week, however, the crisis had passed. Quite counter to my fears, as time goes on I’ve been finding that travel has produced many of the growth side-effects I had hoped it might. I can feel myself becoming more comfortable with uncertainty, in part because I’ve placed myself in more unplanned scenarios, and gained more confidence in my ability to figure things out. Meeting other people like me–nomads and entrepreneurs making a living while traveling the world–who share my values has also helped me internalize a deeper sense of acceptance and contentment with my decision to leave the normal bounds of society behind. I think much of this still has yet to play itself completely out, as I am also still riding on the stability of a cash influx from my recent consulting project, but I’d like to think that my fears have started to quiet themselves, and that the way is becoming clear to achieve some of my business goals for the year.

Saigon promises to be a very different experience from Chiang Mai. The energy here is chaotic and frenetic–frenzied, even–but it makes me feel very alive. This month, I’m trying a stint in a co-working and co-living space in the heart of the city called Start, sort of an experiment for me with a new type of living situation. My experience has already been very positive, and I’m looking forward to new friends, new foods, and new avenues for growth!!